Sullivan's Island – Not so Typical

Home of the Edgar Allen Poe Library, Fort Moultrie and the Sullivan's Island Lighthouse, at first glance Sullivans Island appears to be a typical small charming coastal township. But when you look a little deeper, you begin to see things on this Island that are far from typical. What many don't know, is that up until the end of WWII, much of Sullivans Island was a US military installation. Old military bunkers partially buried, so as not to be seen from sea, are all along the coastline from Fort Moultrie to just beyond the Lighthouse, (The Edgar Allen Poe County Library, pictured below, is housed in one of those old bunkers). 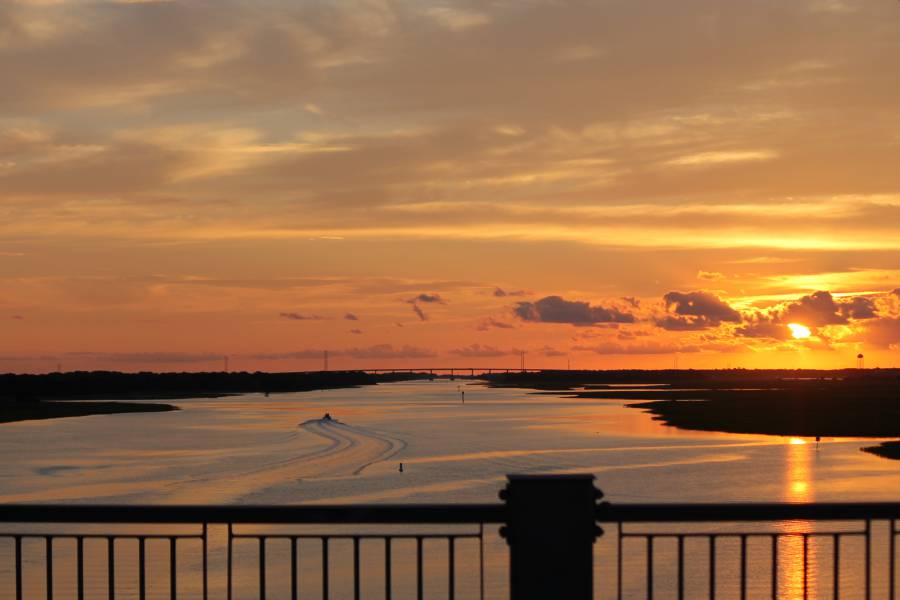 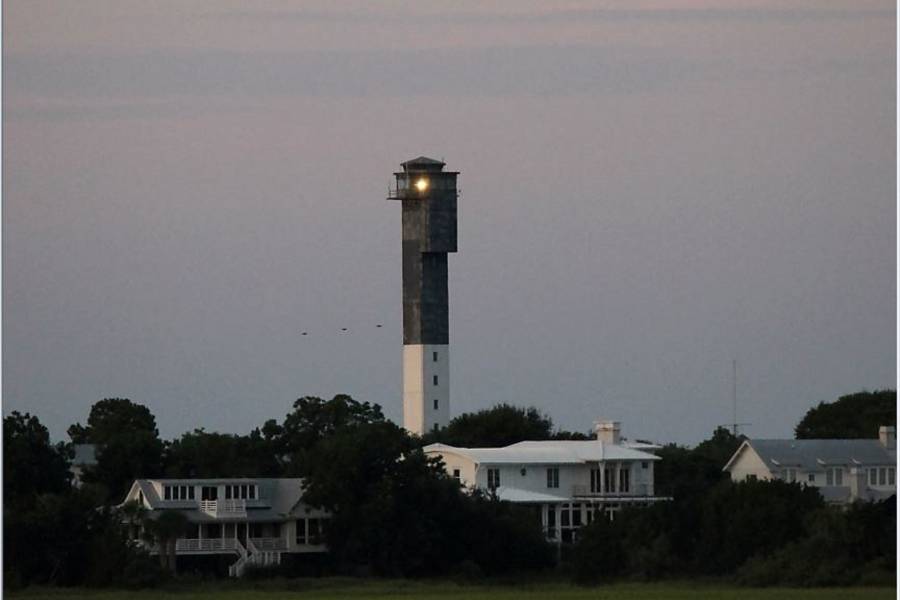 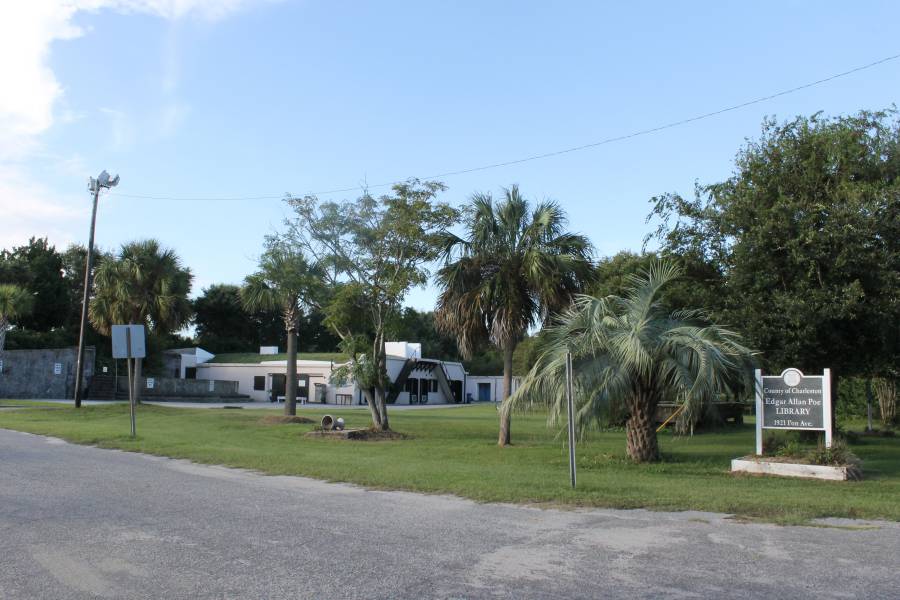 Two of my several early morning cycling routes include roads in and around the Island, of which I frequently take a camera along. This morning as I was approaching the Ben Sawyer Bridge coming onto the island, the sun was just becoming visible along the horizon. I suspended my ride and waited for the perfect photo-op. As I waited I heard the familiar sound of a dolphin blowing air from his blow-hole as he surfaced. I could also see and hear the small fish as they breached the water's surface in an effort to avoid becoming his next meal. Finally, the sun began to peek out over the horizon and through the clouds; and I began taking shots. Shooting from several vantage points, I was hoping to get that perfect photo. As I concluded and readied myself to resume the ride, off to the south the Sullivans Island Light House caught my eye. I've taken pictures of it before, but have never been able to get one that shows the light shining - I got it this time!

Resuming my ride I headed into downtown Sullivans Island. The downtown area, for obvious reasons, is set up primarily to cater to the needs of the beach visitors... or is it? There are no hotels on the entire island; no traditional gigantic beach gift shops that sell shells and trinket whatnots from who knows where. Truthfully, it would appear that Sullivans Island downtown businesses are locally owned - primarily catering to the needs of its local patrons; no franchised cookie-cutter mass merchandisers here. Most of the town's businesses are located on the main thoroughfare through town, Middle Street, to include the town hall and fire station.

Old Bunkers – Remnants of Times Past

In an effort to steer clear of the morning traffic, I cycled into the parallel side streets. With the exception of the Light House, Fort Moultrie National Monument, and various old war bunkers, this area is primarily residential. Most of the homes on this part of the island are not quite what one might expect this close to the beach. Even the large homes are able to somehow maintain a folksy small-town charm. I noticed at least one home that's built right on top of one of the old bunkers. Some of the old war bunkers are being utilized by local government, such as the County Library and the Fire and Rescue Training Center. Other remnants of the U.S. Military's previous presence here have been abandoned - leaving the onlooker with a sense of eeriness, mystery, and intrigue. 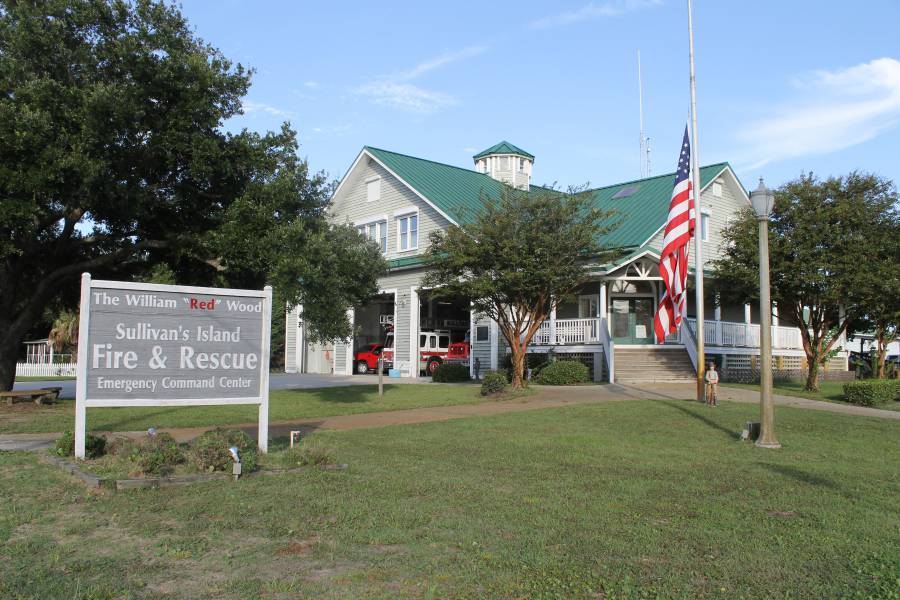 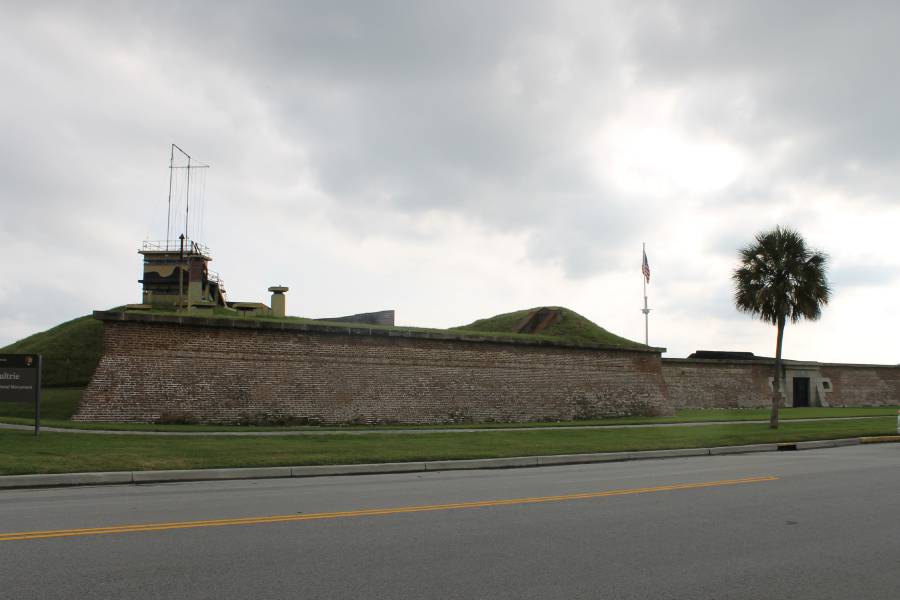 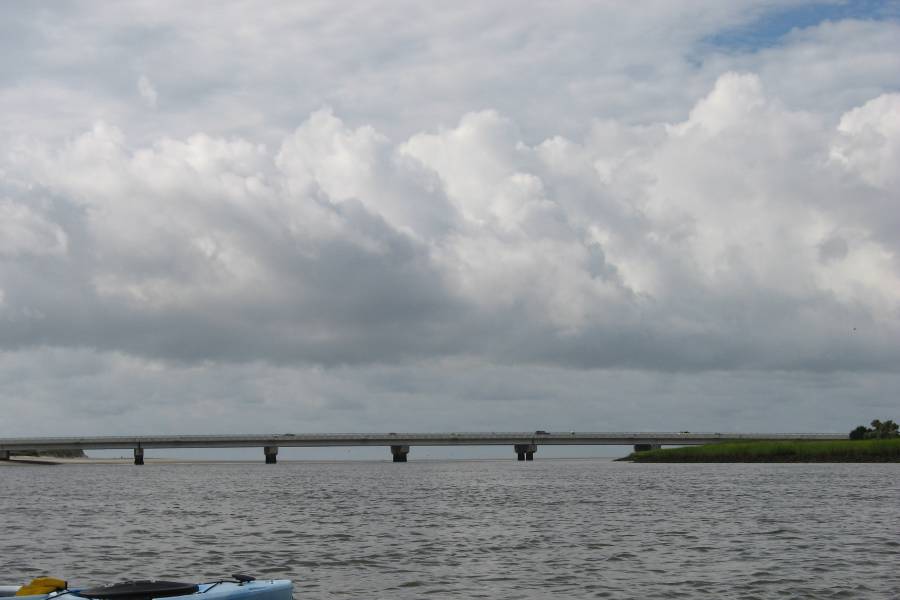 As I turn onto Poe Ave. headed toward Fort Moultrie, I am reminded of the many references to the famous 19th century American writer, Edgar Allan Poe, that can be found all over the island. During his brief military tour of duty, he was actually stationed here at Fort Moultrie in 1827. It's widely believed that at least three of his works were inspired by his time spent here: "The Gold Bug", "The Balloon Hoax", and "The Oblong box". Now passing Fort Moultrie, I am reminded of my most recent visit and tour just a couple of weeks ago. I began to think about the soldiers and sailors who fought and trained here and protected our coastline from any and all adversaries foreign and domestic. So inspired, I will be featuring it in a future article. Up ahead and just around the corner is Benke-Lowe Landing - my turn around point. For the most part, I am at the end of the road here, or I should say the SW end of the island; beautiful view of the Inter Coastal Waterway and the Ben Sawyer bridge.

Headed now toward the NE end of the island, I begin to see quite a few other cyclists out and about. Apparently I'm not the only one that enjoys the exceptional scenic view. So that I can see and hear the ocean waves crashing on the beach as I continue cycling, I keep bearing right as I head toward Breach Inlet. As I look to my right between these beautiful beach-front homes, I am able to realize an experience that seems to engage all of my senses. Rounding the North end of the Island on Marshall Blvd and Station 32 Street, I can now see across the inlet to the Isle of Palms. Breach Inlet - while it provides an awesome view of both, the ocean and the Inter Coastal Waterway, the rip-tides here are strong and deceptive. Consequently, swimming is forbidden. However, it is one of my favorite places for Kayaking.

From it's rich history that dates back to the founding of this country to the present day island cultural and military museum that it has become, Sullivans Island is without a doubt one of the most unique and beautiful barrier islands on the US eastern sea board. It's always been a highly favored location for local beach goers; and recently for cyclists as well. While the Charleston and Low Country area continues to be one of the world's favorite places to visit, it is with tremendous appreciation and heart felt thanks from Charleston and Low Country .com to Sullivans Island's citizens for continuing to maintain a strong sense of historic heritage, integrity, and small town charm.