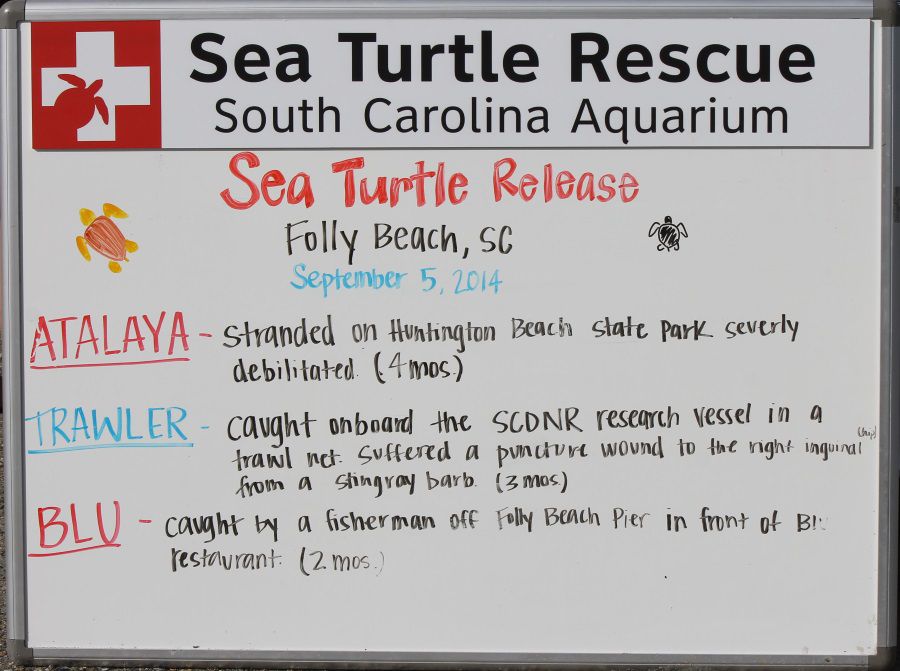 One "Kemp's Ridley" and two Loggerhead sea turtles named: "Blu" (juvenile Kemp's Ridley); "Atalaya" (80-pound Loggerhead); and "Trawler" (123-pound Loggerhead) were released back into the wild at Folly Beach 5 Sep 2014 at 11:00 AM. The event was scheduled to go on, rain or shine. By 10:00 it was starting to rain. But it let up at around 10:45, and folks began to emerge from their vehicles in the parking lot. Soon a good sized crowd had formed around the roped off area. Volunteers from the Folly Beach Turtle Watch, SC Aquarium workers, and the South Carolina Department of Natural Resources (SCDNR) were there organizing and ensuring a fun safe time for everyone, including the sea turtles. 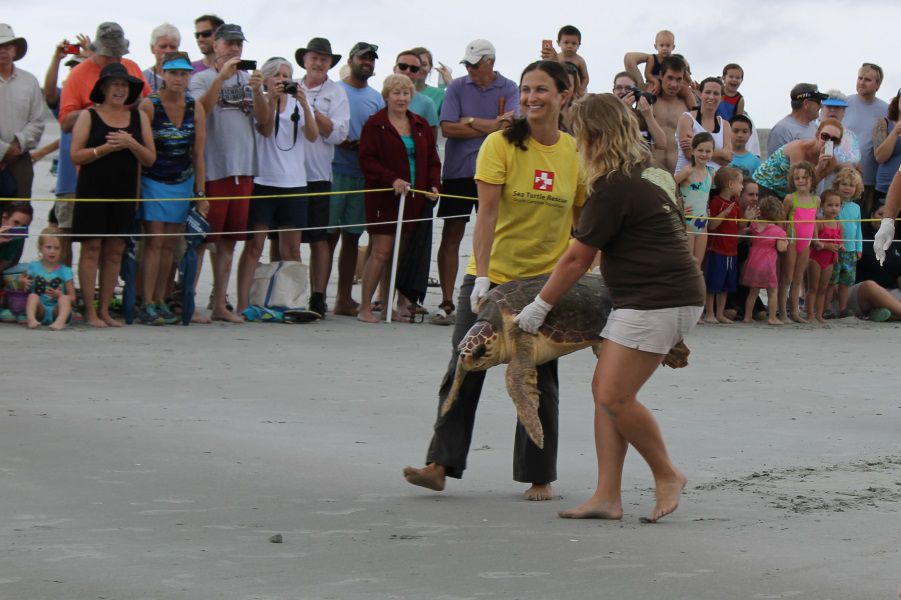 The Loggerhead, Atalaya was the first sea turtle unloaded from the truck and placed on the beach to make her way to the water. She was carried part of the way down the lane with the crowd cheering on both sides. Young children had signs made, and adults were taking photos with their phones, cameras, and video cams. As the 80-pound Atalay approached the water's edge, she appeared hesitant, or maybe just tired from the walk. Sea turtles are hardly agile on land. Finally, she entered the Atlantic Ocean as the crowd applauded her triumphant return to the wild.

Plagued with intestinal parasites, dehydration, and severe anemia, Atalaya was rescued off the coast of Huntington Beach State Park in George Town County. After several months of care and rehabilitation under the watchful care of the Sea Turtle Hospital, she was now healthy and ready to be released. 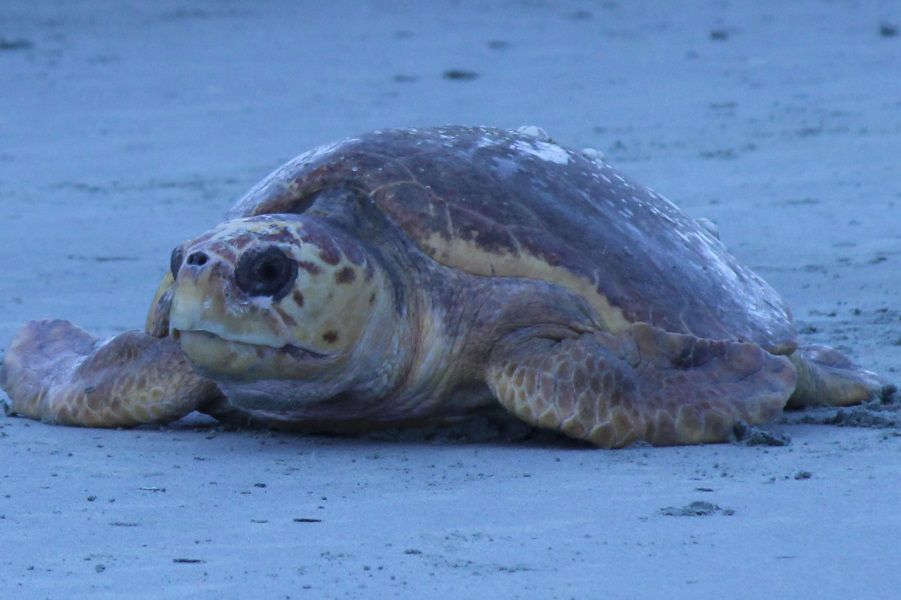 The larger of the two Loggerhead sea turtles released was "Trawler". He was also carried most of the way down the lane between the crowd of fans. They set him down several times, which allowed plenty of great photo-ops for everyone. Unlike Atalya, Trawler didn't even pause as he entered the Atlantic Ocean. In the shallow water, his desire to become submerged in the deep was quite evident. The 123-pound sea turtle moved his flippers so vigorously, they appeared to be spinning like the shaft and rotor blades on an outboard motor. Seconds later he was completely out of sight.

Sharing the occupancy of a fishing net with a sting-ray led to Trawler's need for treatment at the SC Aquarium's Sea Turtle hospital here in Charleston. He received a puncture wound from the ray's barbed tail. With a successful treatment and rehabilitation, he was now ready for release back into the wild. 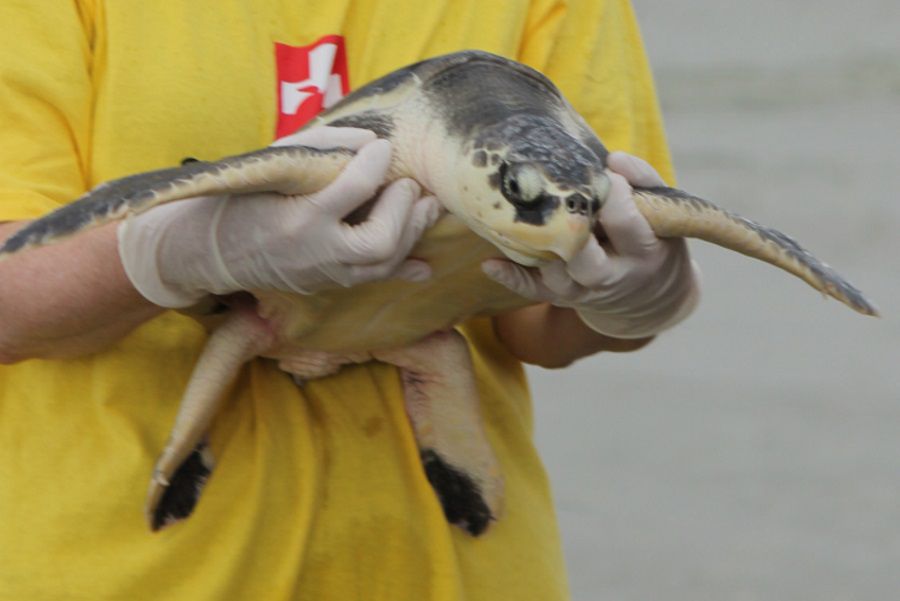 The smallest of the three sea turtles released was Blu. Smallest because he's a "Kemp's Ridley" sea turtle, which is not only the smallest of the sea turtle family but also the most endangered. He was carried up and down both sides of the lane, allowing everyone the opportunity to take some great photos. In the case of sea turtles, smaller means quicker greater agility on land. Set down on the beach just before the last ripples of the waves began to recede back into the ocean, Blu quickly made his way into the water and back to freedom.

Blu swallowed a fish hook that had been intended to catch fish, not sea turtles. Upon the discovery that he had inadvertently caught a sea turtle, the fisherman called the appropriate authorities. SCDNR transported Blu to Charleston's SC Aquarium Sea Turtle Hospital. The fish hook had to be surgically removed from his esophagus. After a successful surgery and only two months of recovery, and rehabilitation, the Kemp's Ridley sea turtle nicknamed "Blu" was released back into the wild.