The Four Regions of SC

As one of the original 13 colonies of the United States, South Carolina quickly became a central part of the newly developing nation's trade, commerce, and civil defense.   Rich with a history that dates back to prehistoric native American tribes, this state has played a crucial role in the overall development of the U.S.  Over time residence of SC began to identify with The geographic and historic attributes of their region of the state, and named them accordingly.  While the imaginary dividing lines between the regions are not always well defined, the central areas of each region remain solid and steadfast.  There are four basic regions in South Carolina: Lowcountry, Pee Dee, Midlands, and Upstate. 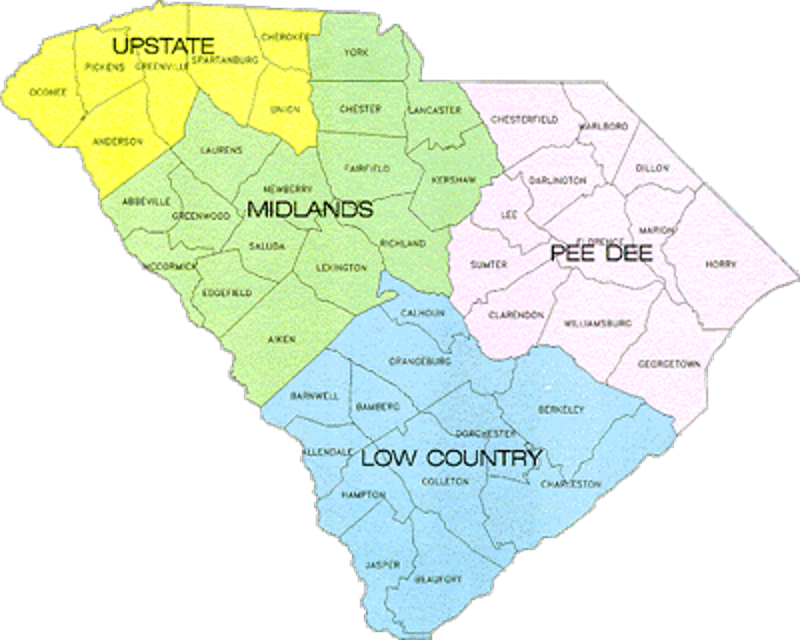 According to geological evidence, the SC coastline in prehistoric times was much further inland, about a hundred miles further inland.   Consequently, the area that is now referred to as the Lowcountry was completely submerged in the Atlantic ocean. Today the Lowcountry usually refers to an area that encompasses only the south-east portion of the state.   When I make reference to the SC Lowcountry in my writing, I am referring to an area that encompasses the following 11 SC Counties:  Charleston, Berkley, Dorchester, Colleton, Beaufort, Jasper, Hampton, Allendale, Bamberg, Orangeburg, and Calhoun.   Swamps, lush green forest, black water rivers and creeks, coastal marshes, and southeastern coastal wildlife abound in the SC Lowcountry region.

The Pee Dee River, a central focal point of this region was named after the Pee Dee Native American Tribe.   The Pee Dee region of SC is in the northeast area of the state, and like the other three regions of the state, there are no formally declared boundaries.   However, in an effort to avoid ambiguity, my reference to The Pee Dee region encompasses the following 11 SC counties:   Georgetown, Horry, Williamsburg, Florence, Marion, Dillon, Clarendon, Sumter, Lee, Darlington, Marlboro, and Chesterfield.  South Carolina's "Grand Strand" one continuous 60 mile stretch of beach is a part of this region.   By definition, the Pee Dee region is also part of the Lowcountry, but if you ask anyone from this area, they'll answer, "This is the Pee Dee."

A few thousand years ago the east side of what we know today as the SC Midlands was at that time the SC coast.   The geological evidence is everywhere throughout the region.   Areas of the Midlands are called the "Sand Hills" today but actually derived from the sand-dunes on the beaches of the prehistoric SC coastline.   The name "Midlands" indubitably came about by this region's current geographic location within the state.   The counties that make up the midlands:  Richland, Lexington, Newberry, Fairfield, Kershaw, Lancaster, Chester, York, Edgefield, Aiken, Barnwell.   The state's capital resides within this region.

Located in the North West portion of SC, the Upstate is also known as the Upcountry, the Piedmont, and sometimes referred to as the foothills.   Bordering the Blue Ridge mountains that also run through North Carolina and Georgia, this region is a refreshing contrast to the other 3 regions.   Home to Table Rock State Park, Sliding Rock, and the Swamp Rabit Trail, the Upstate is a great place for folks wanting to escape the sweltering summer heat of the other SC regions.   The counties of the Upstate: Greenville, Spartanburg, Cherokee, Union, Laurens, Pickens, Oconee, Anderson, Abbeville, Greenwood, and McCormick.

From the Upstate's rocky foothills of the Blue Ridge mountains to the sand hills of the Midlands and the beaches of the Lowcountry coastline, South Carolina is a state full of intriguing diversity, compelling history, and people that epitomize "Southern Hospitality" and the ability to work through adversity.   There's something for everyone in South Carolina.