Starting Out On Our Trip To Morris Island

Saturday night October 1, 2016, at 7:30pm, the Morris Island Lighthouse once again pierced the darkness and illuminated the north end of folly beach and surrounding areas. The lighthouse was decommissioned in 1962 and has remained dark since. This ceremonial lighting was the first time the Morris Island Lighthouse beacon has been lit since that time. Realizing the historic significance of this lighting, I began making plans to attend as soon as I heard about it. My first plan was to walk down the old Coast Guard Road at the end of north Folly Beach and view the lighting from the beach there. However, anticipating the crowd my wife began looking into tour boats that might be covering the event. Charleston Outdoor Adventures (COA) fit the bill perfectly. We reserved our seats online and made our way down to Bowen Island. There we boarded our tour boat and embarked on our trek toward Morris Island. 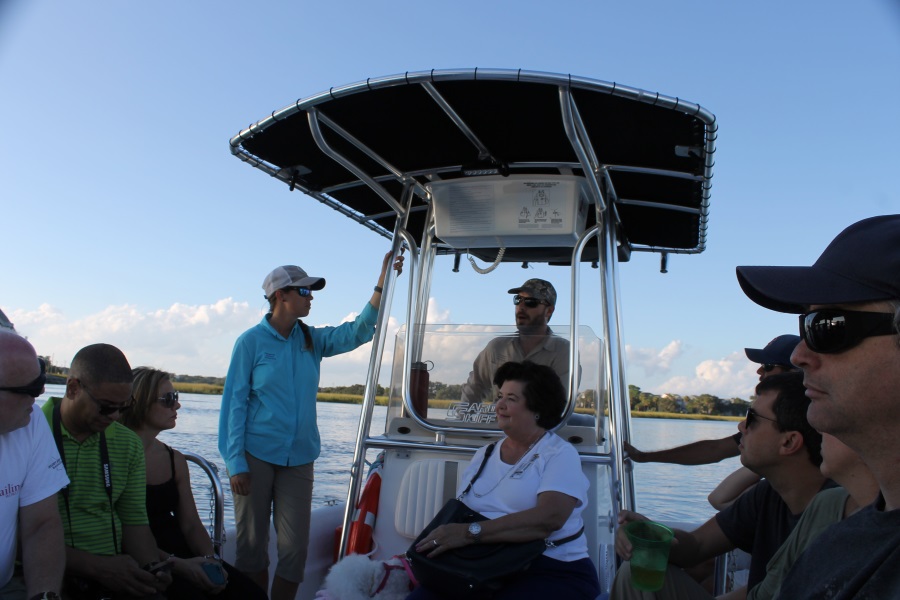 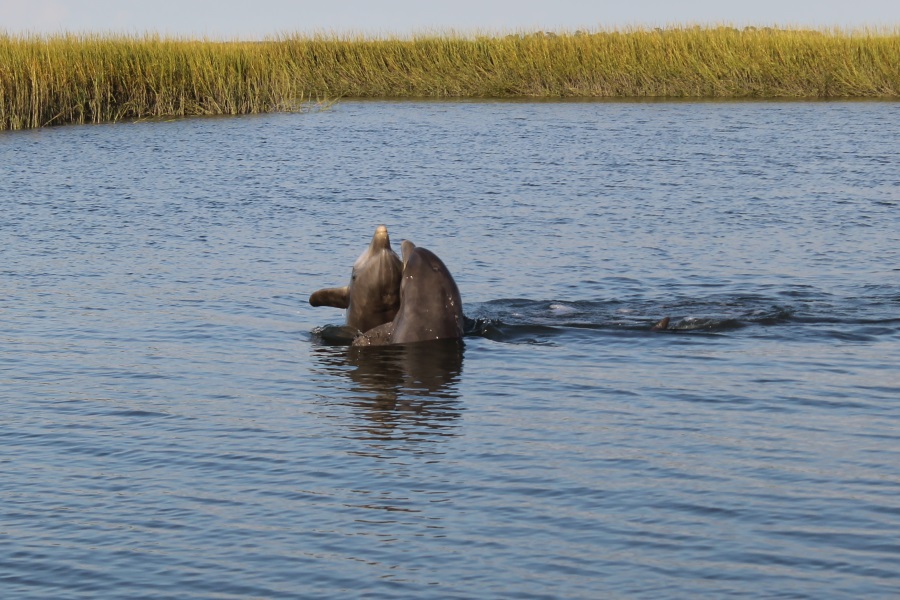 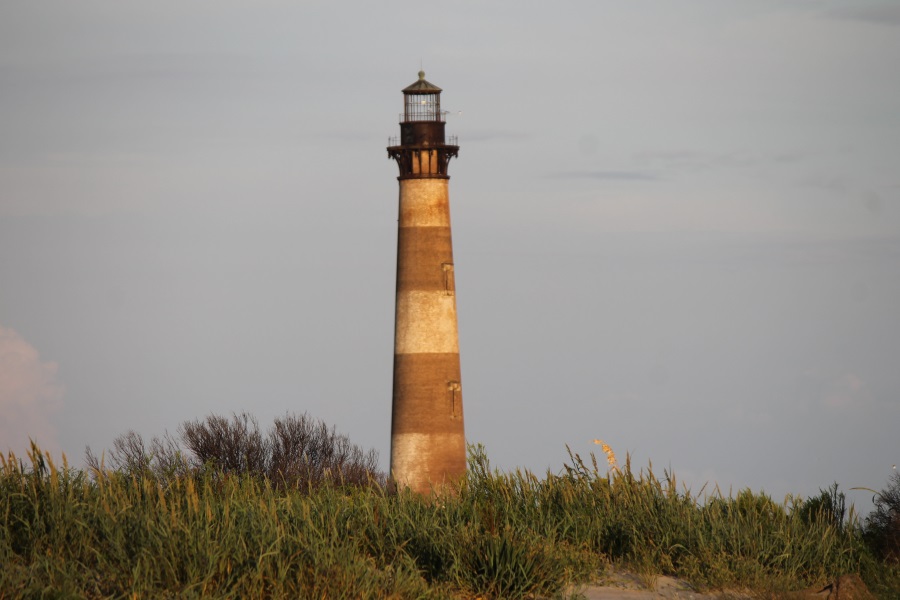 Captain Joe and Lucy were our tour guides for the evening. It's one thing when you listen to someone simply recite a bunch of scientific eco stuff as they pass by this that and the other. However, that was not the case with Captain Joe and Lucy. Their genuine excitement to inform and educate kept us attentive and fully engaged throughout the tour. The salt-water estuaries in and around Folly Beach are beautiful! There is no doubt that we will be going back. COA also offers paddle-boarding and Kayaking tours . A little over half way to our destination, we spotted a rather large pod of dolphins that put on quite a show for us. Captain Joe stopped the boat for a while as he and Lucy filled us in on more ecological wonders, as well as facts about the bottle-nosed-dolphins and their behavior. Of course, during that time we (all on the boat) were going wild taking pictures of the dolphins at play.

I don't know if it's the romantic in me or what, but the Morris Island Lighthouse has always captivated my imagination. As we rounded the corner and made the transition from "Folly Creek" to what's known as "Lighthouse Inlet", there it was as beautiful, mysterious, and intriguing as ever. Across the inlet and to the south and our right we could view the furthest north end of Folly Beach. My wife was right, quite the crowd had converged on that small portion of Folly Beach. Captain Joe brought the boat to shore on Morris Island about 500 meters west of the Lighthouse where we disembarked and made our way toward the lighthouse for a closer view. About 20 minutes prior to the lighting we got back on board and Captain Joe brought us around for the best vantage points as Lucy expounded on Morris Island Lighthouse history. Even though I grew up in the SC Lowcountry area, I've never been inside this lighthouse. Back in the 1970s and I guess up until about 1999 before it was purchased by "Save The Light Inc.", there was apparently no lock on the door and people could enter at will – provided they could get to it since it was completely surrounded by water. Well, it just so happens that our tour guide is one of those fortunate people that's actually been inside and climbed to the top. So she was able to provide us with some truly interesting details. One of which is the stairway. Unlike any lighthouse that I have ever toured, the stairway in the Morris Island Lighthouse is not attached to the walls! It's just a straight up metal spiral staircase attached to the floor and ceiling only. 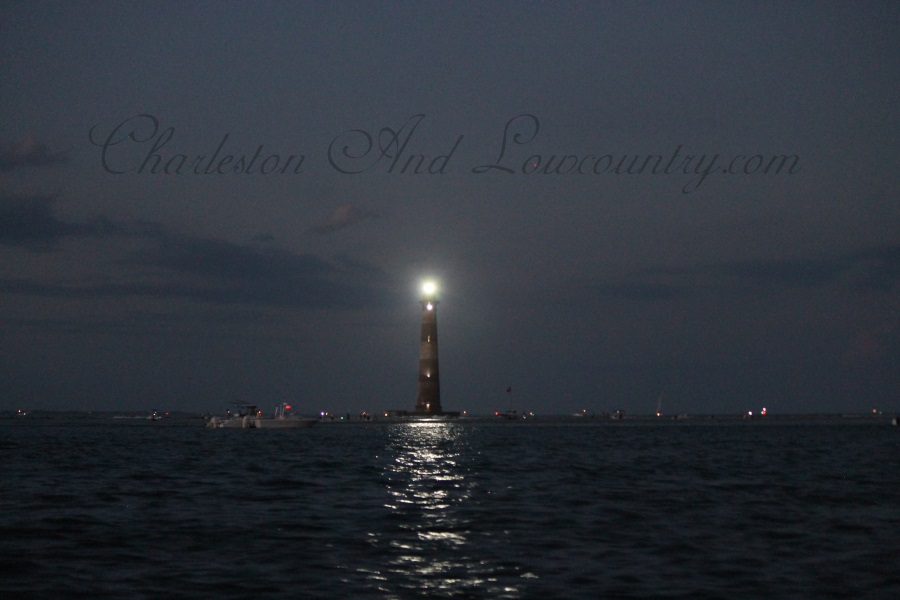 The Historic Ceremonial Lighting of the Morris Island Lighthouse 2016 from Stephen Vail on Vimeo.

The Lighting of The Morris Island Lighthouse

The evening could not have been more perfect for the occasion. The weather was exceptional and looking off to the west, the sunset appeared to be making an attempt to upstage the evening's main event – and for a few brief moments, it was actually succeeding. However, as the sun slowly vanished beneath the horizon, the stage was set, the countdown had begun, and all focus was on the Morris Island Lighthouse. CPT Joe slowly maneuvered the boat so as to allow us the best view possible as Lucy narrated significant historic facts and details relevant to the Morris Island Lighthouse. As the time grew closer, CPT Joe would interject an update on the countdown, "ten minutes"... "five minutes". It was unbelievable. First, we saw a light in the bottom window and then each window lit up sequentially from bottom to top until at last... the beacon at the top of the old Morris Island Lighthouse appeared to be completely engulfed by pure white light. Then just as in days of old, the light appeared to be rotating. What a sight! The excitement and exhilaration of the event are still with me.

This lighting ceremony commemorated the 140th anniversary of this beautiful old lighthouse. Thank you "Save The Light inc." and the SCE&G engineers that made this event possible.