Bulls Island and Bone Yard Beach - A Low Country Must!

From the ferry ride over to the island to the ferry ride back, this is an adventurous exploration of an island that is unique in every way. The sights, the sounds, and the serenity along with the overall natural beauty of this SC Lowcountry barrier Island make it a place of wonder, discovery, and amazement.

I highly recommend taking the Bulls Island Ferry via Coastal Expeditions for your first couple of visits anyway. After all, they know the way there; but most importantly is the information you'll receive from the Captain, William Christianson. Coupled with Mr. Christianson's masters degree in Marine biology, his enthusiasm and passion for the entire Cape Romain Area provide for an experience unparalleled to any tour that I personally have ever partaken. Honestly, I wish that I had recorded everything he said. One of the most surprising and interesting facts - Bulls Island and the Cape Romain area are home to one of the cleanest and healthiest ecosystems in the US. Another recommendation - take a bicycle, (mountain bikes); the bikes enabled us to see a great deal more than we would ever have been able to see and experience on foot. Regardless of how you decide to tour, there is just simply more to see and experience on Bulls Island than can be achieved in any one day. 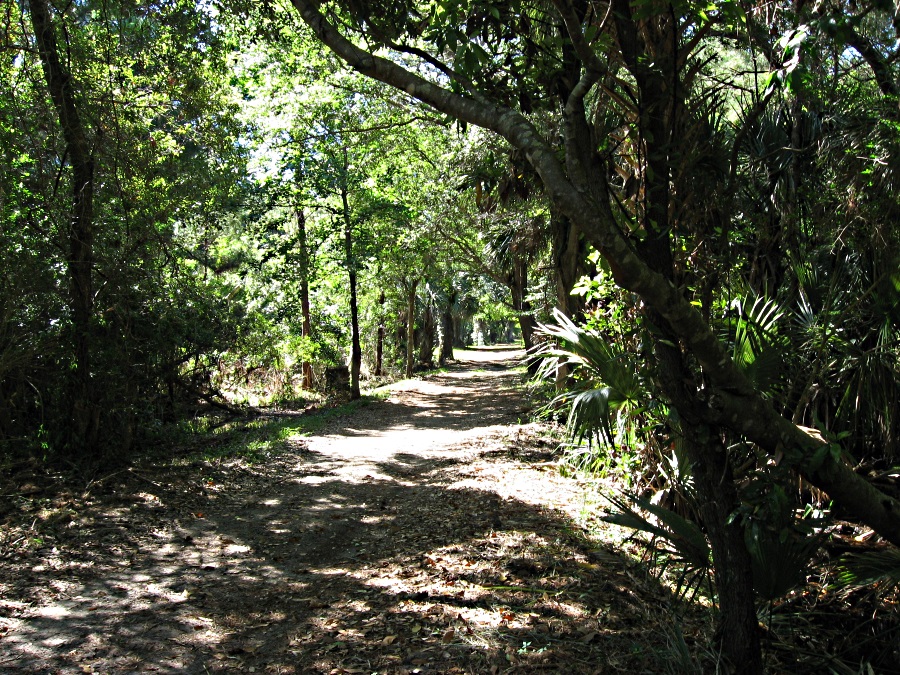 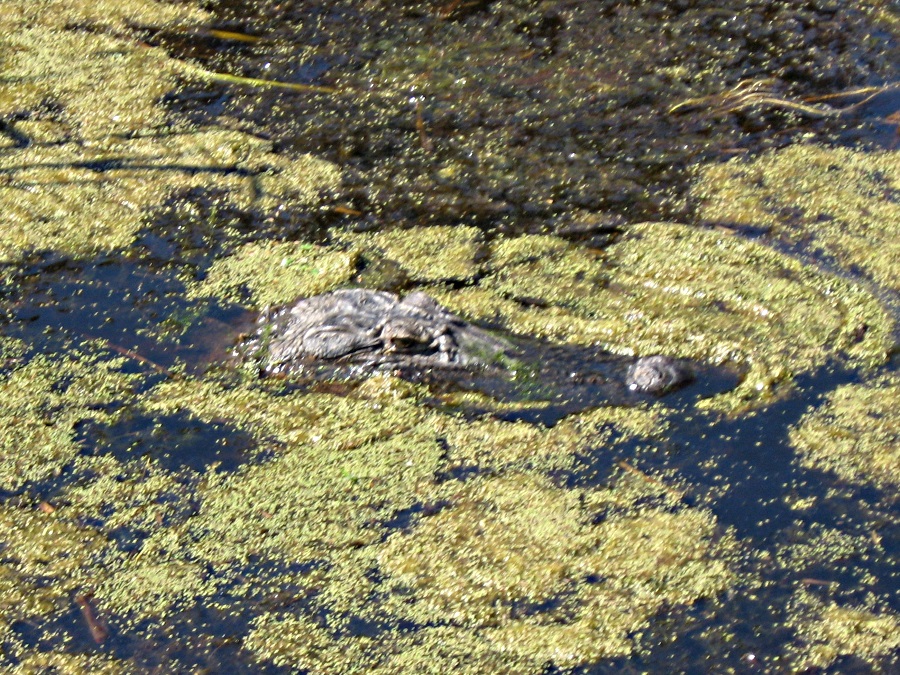 Once the Ferry arrived at the dock, our immediate goal was to mount our bikes and begin movement toward our primary destination - Bone Yard Beach. We studied our map and concluded that the fastest route there would be by way of the trails; which would also take us right through the heart of Bulls Island's interior. Shortly after getting underway, we spotted a couple of rather large Alligators basking in the sun… on the trail… right in front of us; our sudden presence obviously startled them and they immediately hit the water before I could ready my camera. As you can see in the above photo, this one didn't go very far.

The view of the trail opening up onto Bone Yard Beach was one of awe - very hard to describe with mere words and I'm afraid my photos fall way short of conveying the natural beauty of it all. I have never seen or experienced anything like Bone Yard Beach. The entire Cape Romain area is not only one of the cleanest ecosystems, it's also one of the healthiest. This was evidenced in every tidal pool we happened upon. They were all teeming with life; multitudes of live conchs, hermit crabs, and various small saltwater creatures. Of course, since we were at the beach, we went for a swim and did some shell hunting as well.

One of my wife's favorite aspects of the trip was riding her bike down the beach as opposed to the trails. I lost count of how many times we stopped as we spotted numerous shells; lots of conch shells of all sizes - only, there were conchs living in them, so we let them be.

No beach houses, no hotels, and with just a few people brought over on the ferry, it was as if we had the entire island to ourselves. Don't get me wrong, we also had a great time conversing with some of the others as our paths crossed throughout the day. 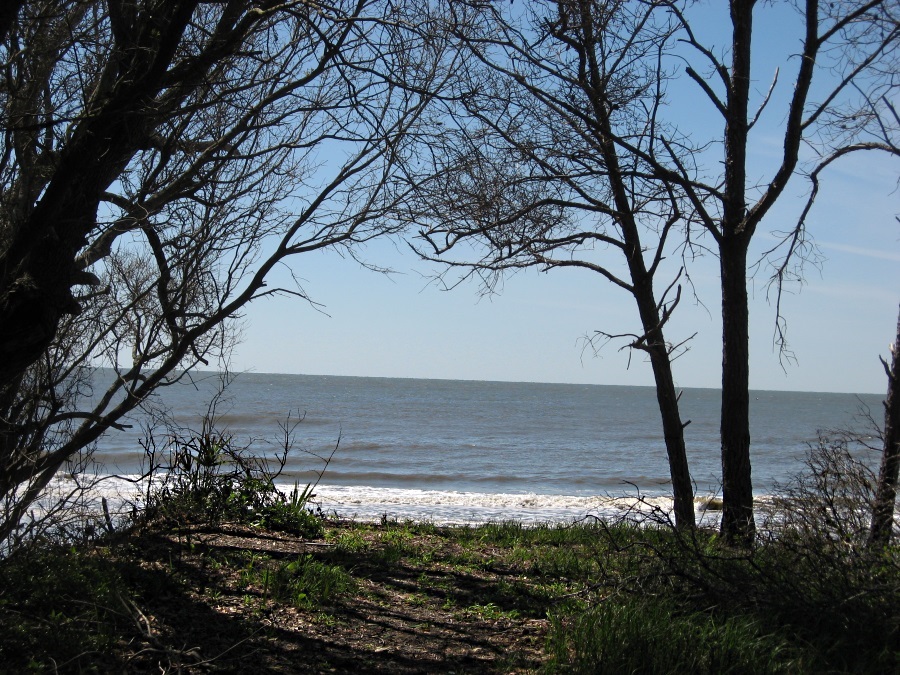 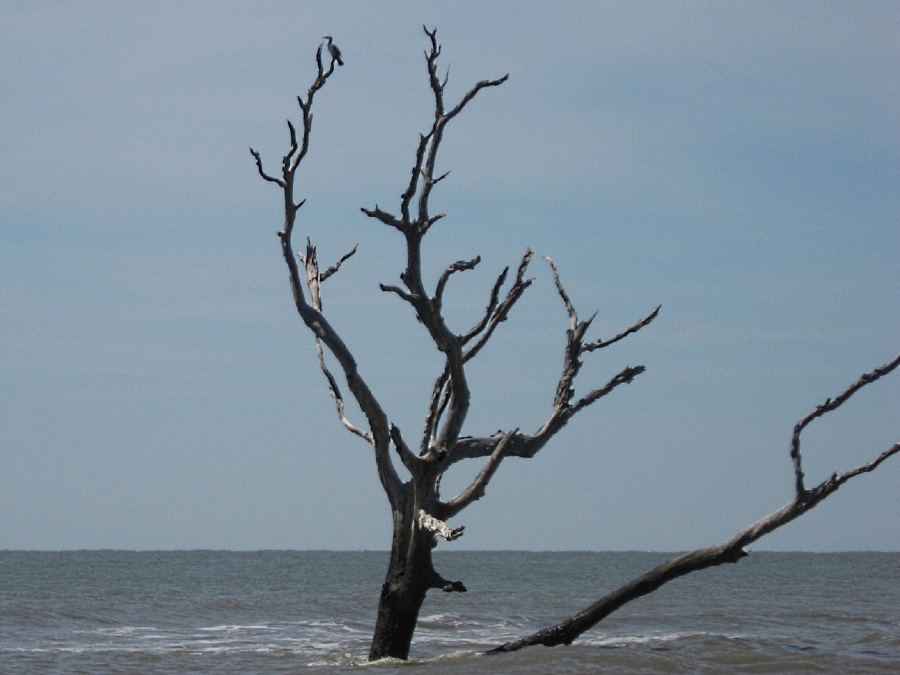 The sea bird's utilization of the trees in the surf as a lookout for their next meal only adds to the overall natural appeal of this extraordinary beach. There is a creek that flows from one of the island's interior ponds that intersects with the ocean right at Bone Yard Beach. I can't say that I have ever seen anything quite like it.

Surreal…is the adjective that came to mind as we walked amongst this once thriving forest. Because of the ever-changing tides and currents, erosion at this end of the island along with the salt, sand, and the sun have produced a literal “boneyard” of sun and salt bleached trees that have been sanded smooth by the salt and sandy ocean tides. The start of our shell bounty: mostly sand-dollars and a few conchs. By the day's end, we had quite an assortment of shells of all kinds, shapes, and sizes. The last couple of hours of the day, I wanted to see more of the island's interior, while Beth continued her enjoyment of the beach and shell collecting. I got back on my mountain bike and headed for the island's inland. 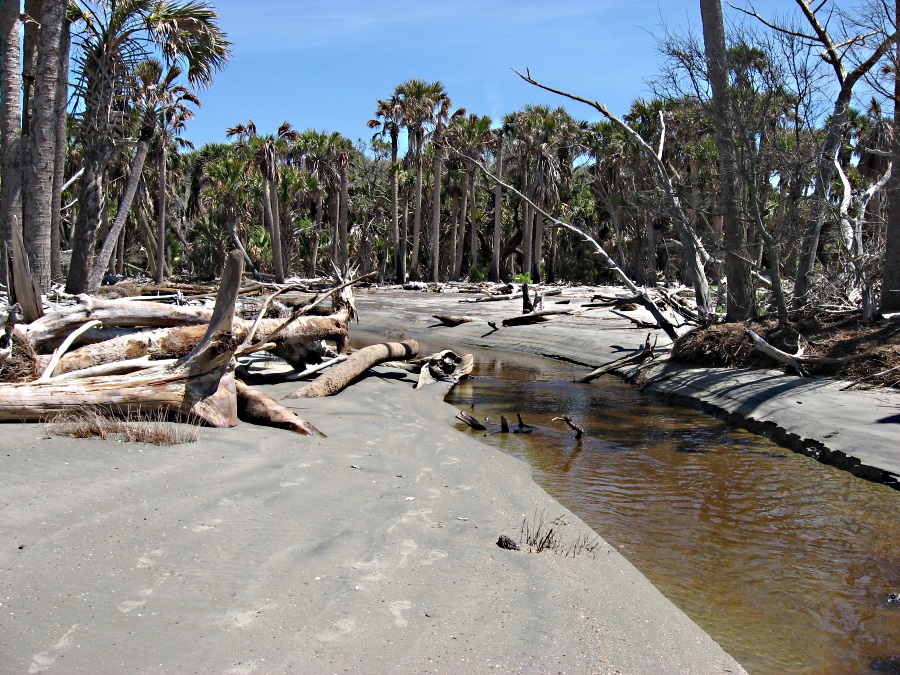 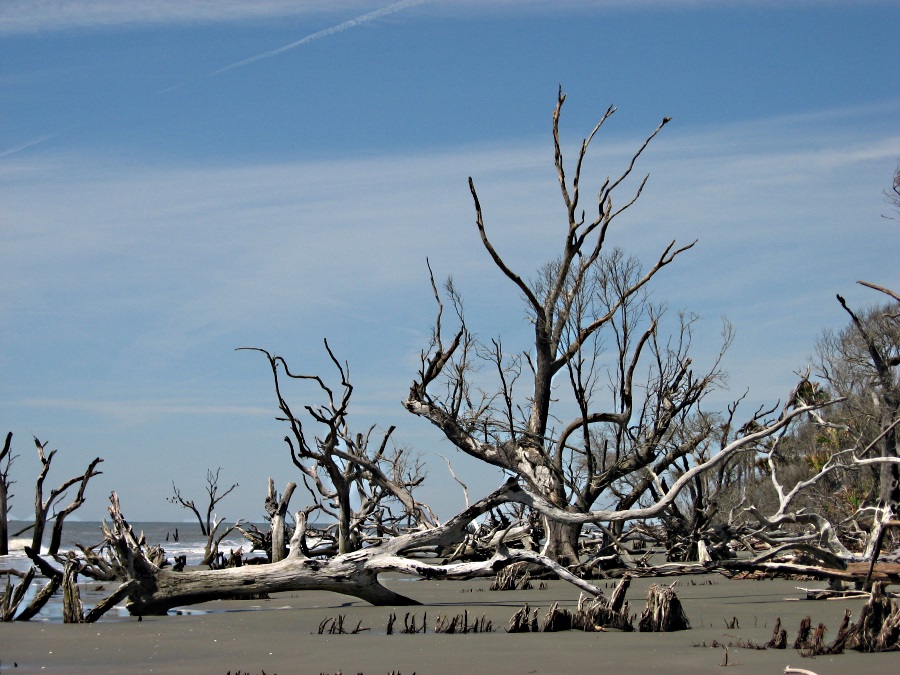 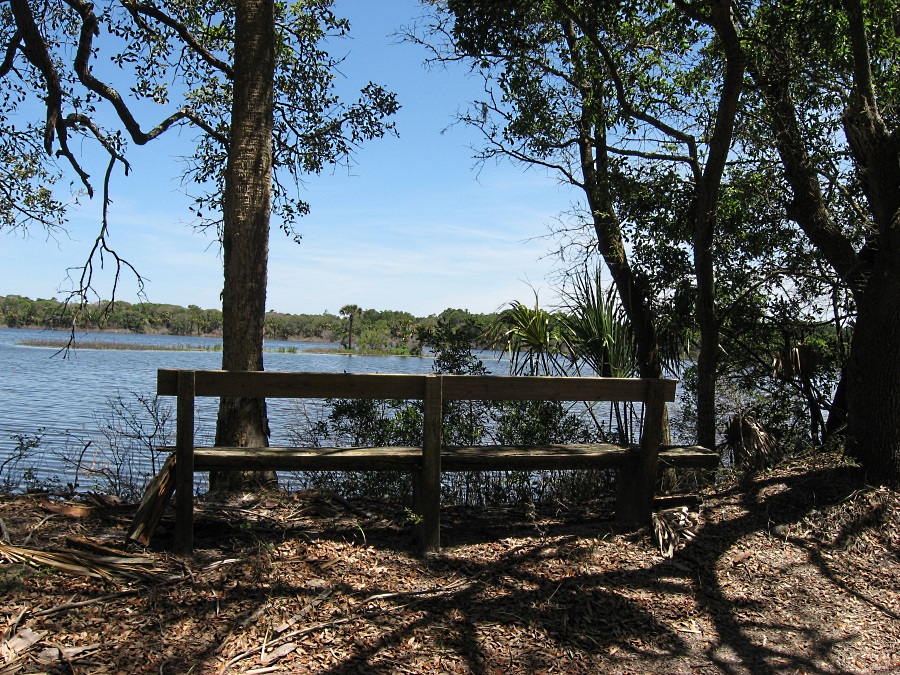 The ponds on Bulls Island, like everything else, kept me in an awestruck state; pristine, uncontaminated, natural, and spectacular.

Watching the birds was its own unique experience. You'll understand what I mean as you view the following photos. With their beak open they skim the surface of the water. I don't think they're doing it to get a drink. They're actually catching small fish that swim close to the surface. Wow! for me it was fun to just sit and watch for a while. Bulls Island is an awesome place full of life, adventure, and serene beauty. 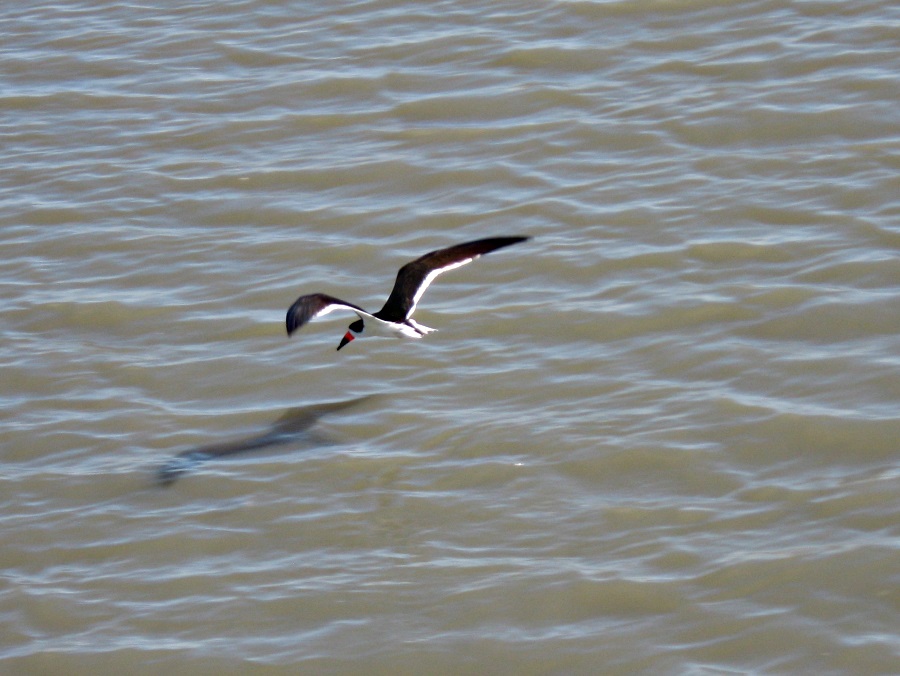 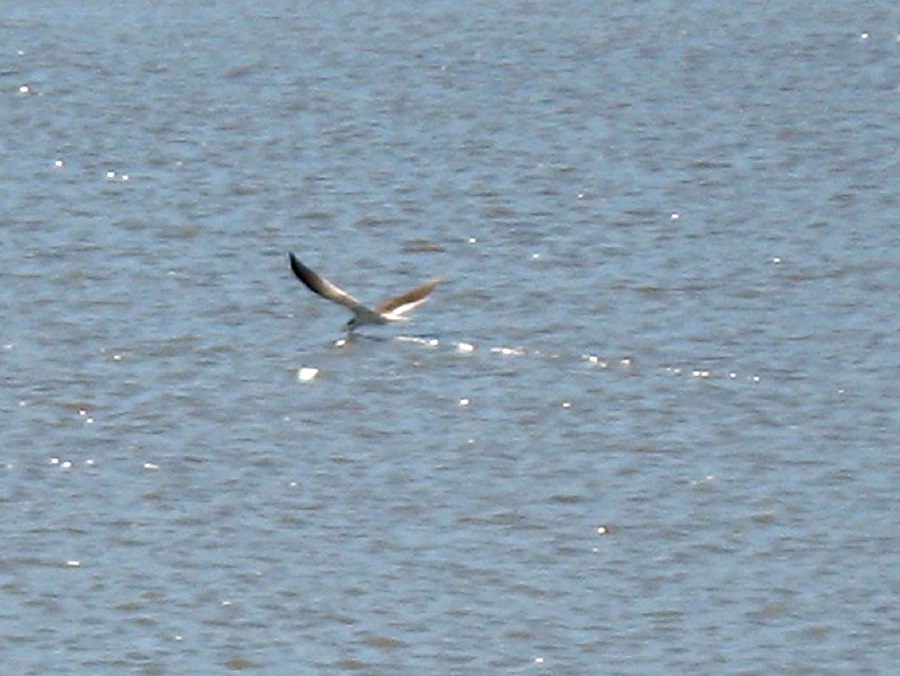 While attempting to describe one of the most amazing places I have ever seen or experienced, I am only too aware of the fact that my words and photos cannot even begin to convey the awesome sights and sounds of this extraordinary island. We'll be back, and that's a certainty. Maybe we'll see you there.