Posted on 3 May 2018
Category: Historic Sites, Did You Know?
Author: Steve Vail

When most of us think about World War II history, the SC Lowcountry, and southern coastal regions of the US do not immediately come to mind. Yet as I delved deeper into this part of our history, my discoveries brought me to a place of intrigue and amazement. Did you know...?

POW camps were located in nearly every State of the US and at the height of the war these camps housed over 425,000 POWs which included over 371,000 Germans, 50,000 Italians and 3,900 Japanese.[1] However, a truly comprehensive list of those camps is yet to be found.

From what I have been able to ascertain so far, an exhaustive list of WWII POW camps that were in South Carolina isn't in existence either. The SC State Museum in Columbia list 21 camps. However, after reading through it and comparing it with what I have researched, there are quite a few that didn't make it onto that list. I grew up and currently live in Summerville, and for over 20 years worked in Columbia. Consequently, the camps with which I am most familiar are the ones located in Columbia, Charleston, Holly Hill, and Walterboro. Of the sights, I have had the privilege of visiting, Duke Camp which is located on the outskirts of Holy Hill is the most well preserved. Some of the buildings on site are the same ones utilized by the camp during the war.

Shortly after the end of the war, Camp Duke was converted into a forestry learning center – Initially for students from Duke University and eventually for students, both male and female, from several Universities. Today Duke Camp is home to a non-profit organization, "Lowcountry Field of Dreams", whose mission it is to provide children with lifelong, life-threatening illnesses an opportunity to get outdoors and make memories hunting and fishing. 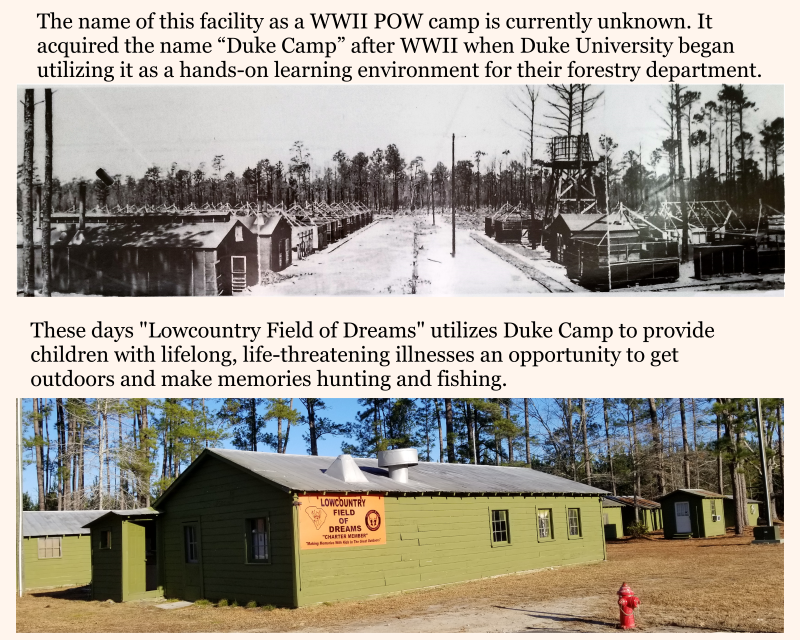 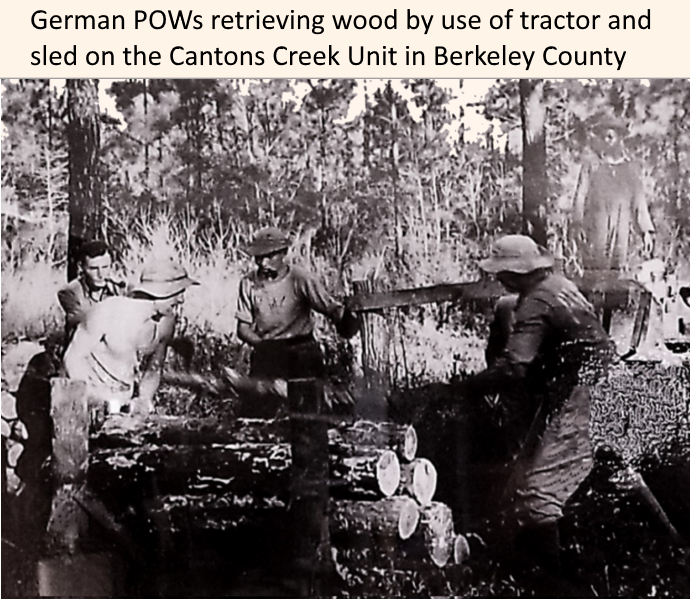 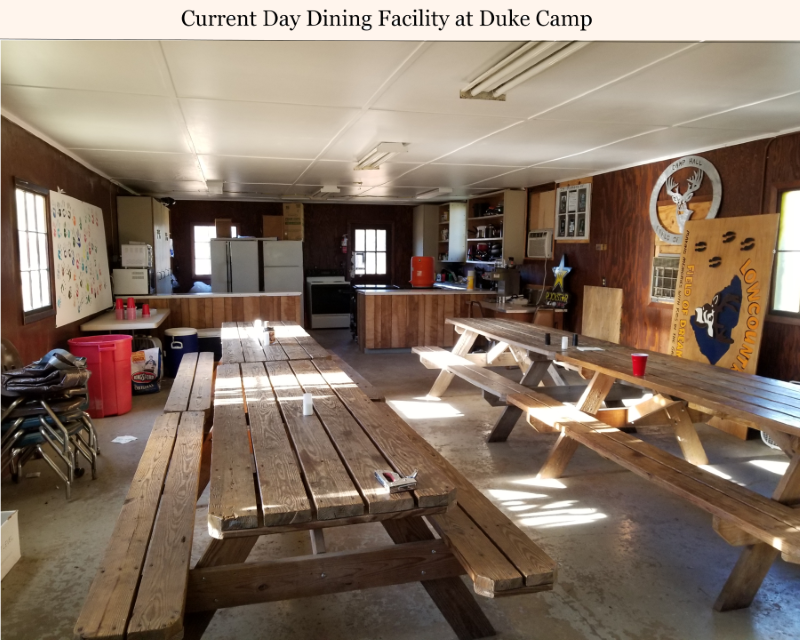 A fellow blogger, Tom T Traywick has written a great article detailing the interaction some of the prisoners had with some of the locals that lived near the POW camp close to Bamburg, SC. The name of his blog is Old Ones Dream. It's an enjoyable read and very informative.[2]

Along the US Atlantic Coastline, German U-boats launched an offensive against the US that resulted in nearly 400 US ships being sunk and the loss of life for over 5000 men. About half of those destroyed ships were sunk off the southeastern seaboard between North Carolina and Florida.[3] In contrast, the number of lives lost during the attack on Pearl Harbor was 2403.[4] The reason this is a significant fact is that nearly every American knows at least something about the attack on Pearl Harbor, while nearly every American knows nothing about the attacks on the continental US off the US Atlantic coast. There is of course... a reason for this. In an attempt to avoid adversely affecting the morale of the general US public as well as military forces fighting abroad, the US military, US government, and US intel agencies utilized the propaganda slogan, "Loose Lips Sink Ships".[5] Apparently this campaign was uncommonly effective. To this day hardly anyone knows anything about what was going on off the US eastern seaboard during WWII. Most people with whom I have spoken, both military and civilian, know nothing about any US ships being sunk by German U-boats off the US Atlantic coast. This amazes me because there are accounts given by people that were living in Cape Hatteras and along the NC Outerbanks of explosions followed by black smoke that could be seen just off the NC coast. The percussion from some of the explosions was so strong they cracked some of the residents' windows and walls. This was known to have been a daily occurrence for residents living along the NC Outerbanks.[6] 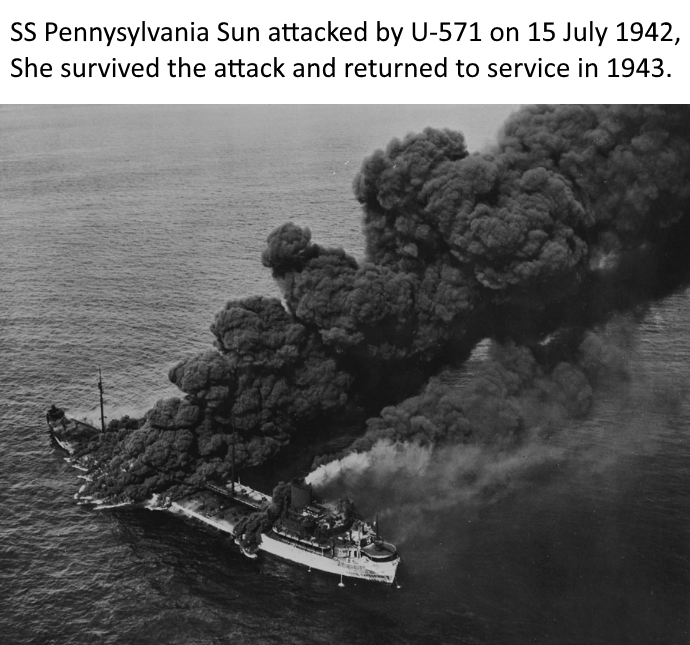 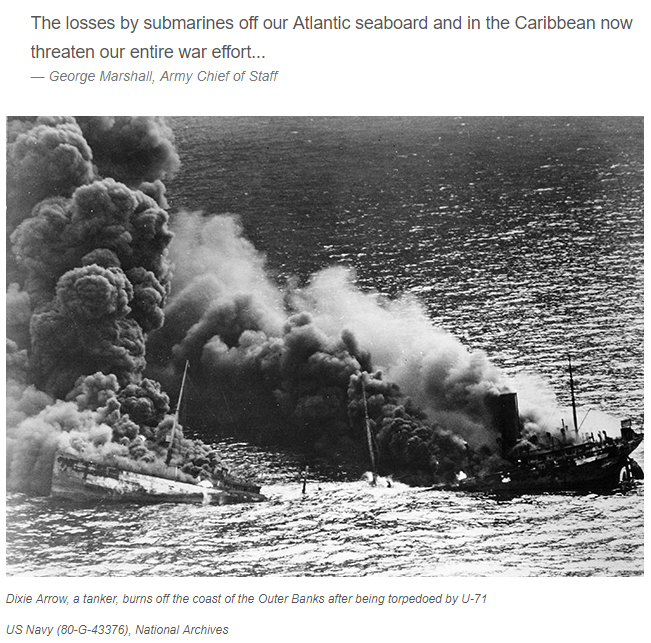 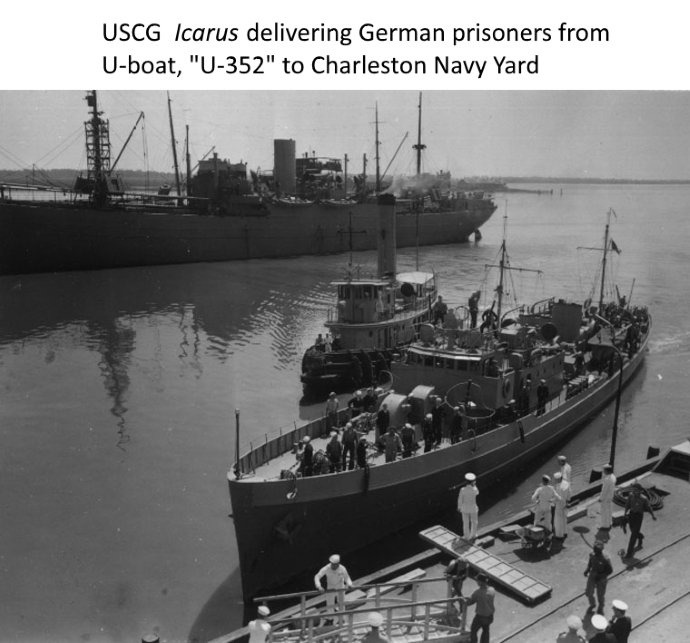 Old Forts and their Role in the
Spanish-American War, WWI, & WWII

There are two old forts along the coastline of the southeastern portion of South Carolina.
Fort Moultrie, which is located on Sullivan's Island and on the northeast side of the Charleston Harbor. The second, Fort Fremont is located on Saint Helena's Island which is just north and across the Port Royal Sound from Parris Island. I've toured both of these installations. Fort Moultrie I've toured several times and I published an article about it a couple of years ago. 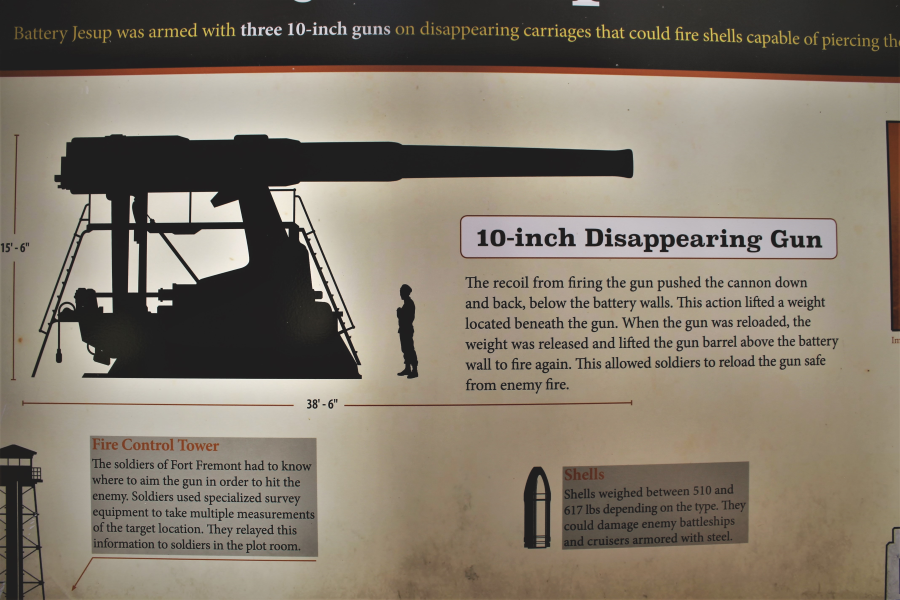 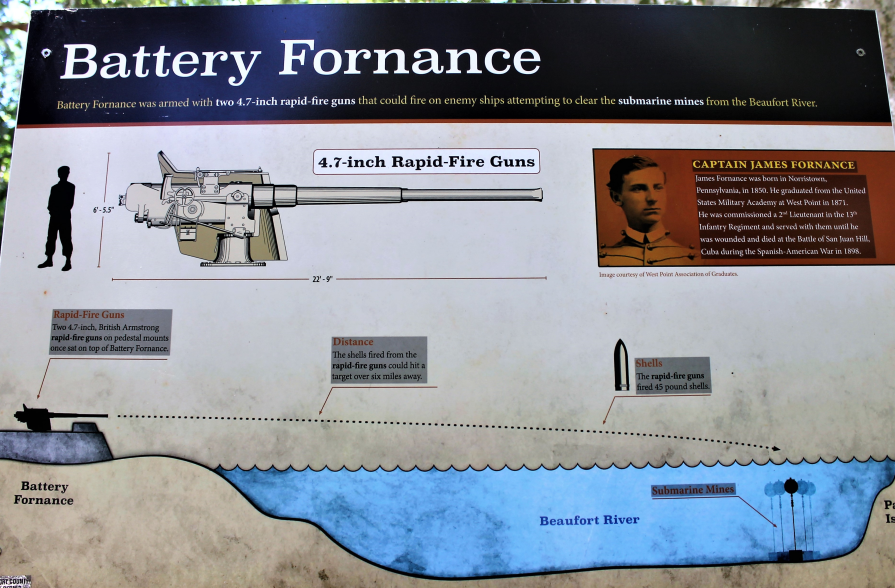 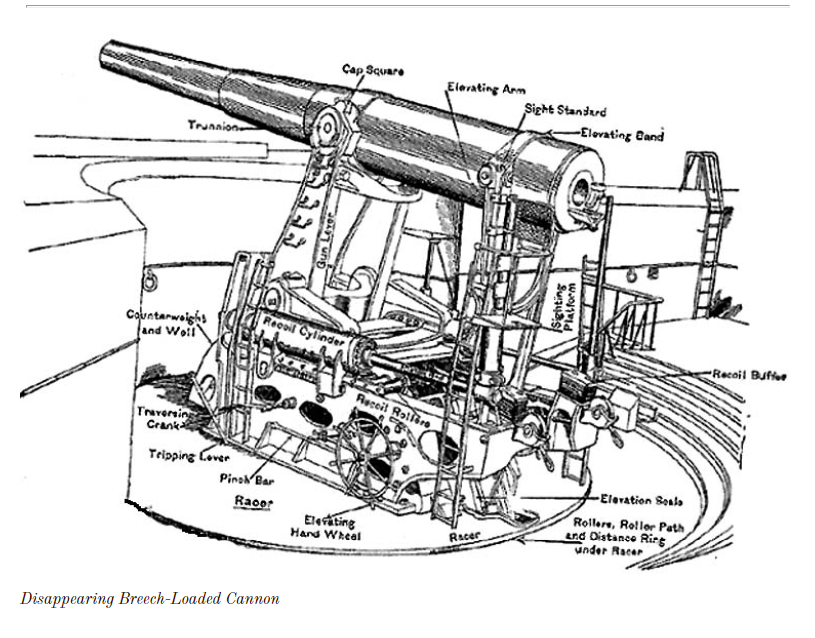 Reportedly, however, due to the fact that battles of the Spanish American war never reached the shores of the Continental US, both Fort Fremont and Fort Moultrie only performed training exercises during this time period. Shortly after the war many of the coastal military installations constructed primarily for coastal defense were decommissioned and closed. Fort Fremont was no exception. I can't help but wonder though... if Fort Fremont had been recommissioned could it have provided some desperately needed defenses for US and Allied forces ships sailing through the waters along the US Eastern Seaboard?

Fort Moultrie, on the other hand, stayed active up to and through WWII. However, according to record, the fort never engaged in any battles or confrontations with any enemy forces after the War Between the States. I have a hard time believing that, especially when I take into consideration the number of US maritime vessels that were destroyed and lives that were lost along the Carolinas' coastline by German U-boats. It's also hard for me to believe that a military installation, such as Fort Moultrie, equipped with artillery that could hit targets up to eight miles away, did not engage in any attempts to destroy German U-Boats that were wreaking havoc along the US Atlantic coastline, some of which no doubt crossed right through the eight-mile kill zone. Truthfully? We may never know. Due to the US government's campaign to suppress all communication about the tremendous losses incurred off its Atlantic coastline, even to this day, unless you're researching the subject, this part of American history remains... undisclosed and in some cases, I believe completely concealed. 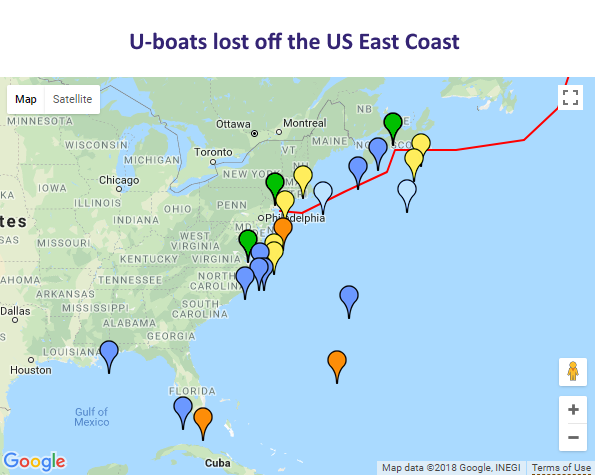 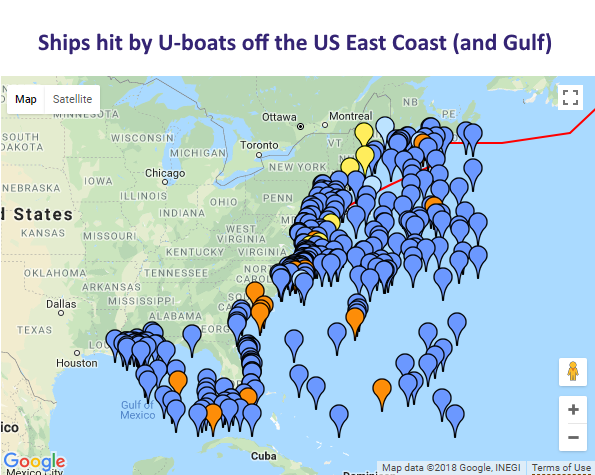 The pics of the maps above were copied from: uboat.net and are also links to that site.
On uboat.net these maps are interactive. When you click on each of the ship/uboat markings, they identify the ship/uboat, its captain, where it was when it was destroyed, and who destroyed it.[7]

It's tragic that US history classes in both High Schools and Colleges do not even make mention of WWII POW camps in the US or the fact that the US suffered some of its greatest losses of WWII just off the US Eastern Seaboard. Instead, they focus on what was happening in Europe and the South Pacific. This could be due to the US governments campaign of 1942 to hide the truth that, along the US Atlantic coastline, the US was losing the war. Only recently when I began researching the subject, did I learn of US history that has been neglected, forgotten, and in some cases deliberately concealed for nearly 70 years. Fortunately, I'm not alone in my quest to learn more about what was happening here on the US home-front during WWII. There is a number of books and websites dedicated to this subject disclosing truths that to most Americans... still remain obscure and hidden.