CHARLESTON AND THE NEW WORLD

The Charleston Gaillard Center Presents:
CHARLESTON AND THE NEW WORLD

There is perhaps no better way to describe our 2019-2020 season than “an embarrassment of riches.” Dvořák’s New World Symphony hardly needs an introduction. Among the most popular symphonies of all time, From the New World debuted to “thunderous applause” at Carnegie Hall in 1893, with immediate encores around the world. Dvořák wrote this masterpiece after studying Native American and African American spirituals in the United States, and became heavily involved in promoting the success of African American musicians and composers. He fervently believed that the future of American composition lay in the roots of spirituals and folk music, saying, “They are the folk songs of America and your composers must turn to them.”

One Flew Over the Cuckoo’s Nest

Flowertown Players Underground Series
At the Summerville Community Theater
Presents: One Flew Over the Cuckoo's Nest
Is He Crzy or a Hero?

In an Oregon psychiatric facility, the intimidating Nurse Ratched has unyielding control over her patients. That is, until the lively, rebellious Randle McMurphy enters the picture. As McMurphy takes over the yard and rallies the patients to his cult of personality, the power struggle between he and Nurse Ratched grows more and more explosive.

Junie B. Jones: The Musical 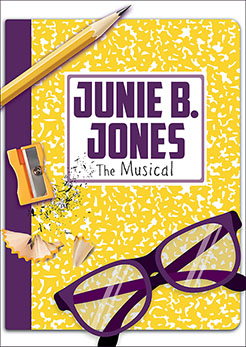 CHARLESTON STAGE
In Residence at the Historic Dock Street Theater
Presents: Junie B. Jones: The Musical Book and Lyrics by Marcy Heisler
Music by Zina Goldrich
Adapted from the "Junie B. Jones" Series of Books by Barbara Park
Direction by Marybeth Clark
Musical Direction by Rylee Coppel

Come sneak a peek into the first grade world of the sassy and lovable Junie B. Jones! No one believes in herself quite like Junie B! Join her as she tackles first grade with its best pal problems, meets the new kids on the bus, and meets her new teacher, Mr. Scary.

Buffalo, New York, 1953. The aging stars Charlotte and George Hay are living out their twilight years on the stage with a five-man touring company, performing Cyrano de Bergerac and Private Lives in repertory. With their relationship on the brink after George is caught cheating with a young starlet, the Hays discover they may have one final chance at fame and fortune: Frank Capra is coming to see their matinee, and if he likes what he sees, there may be a spot for them in his next film. Unfortunately for them, everything that can go wrong does. Moon Over Buffalo is a rollicking showbiz farce that’ll resonate with everyone that’s ever called the theatre their home.